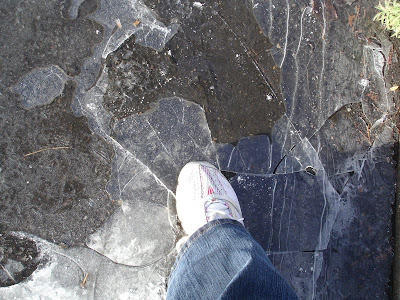 Today was a freaking hilarious extravaganza. I put the finishing touches on the grammar of my finals and printed them up. Then I headed out to the rail, but beforehand I got to see the bizarre overload to our milk box.

Our milkman is a freaking nutball, and constantly gets our order totally freaking wrong. Always a mixed bag, not scary like the King short story or anything, but always an adventure, but the 12 half gallons this morning was hilarious.

At the rail station there was a ton of that great thin crackly ice that is just fun to crunch crunch crunch on, and that got me to giggling so much I almost missed my first train.

I got to speak to an advisor, and although it feels like I’m going to die going to school I am on track to graduate around the same time as my son graduates from high school (maybe even sooner). Now I just need to speak to an advisor specific to my major about my senior project and the possibility of where I need to apply for graduate schools.

Then when I got home, my Telluride Film Festival “certificate” had arrived. Not sure what to do with the thing, but it made me think of the Film Festival and how great an experience the whole thing was to me.

Just a silly fun day, and now I’m gonna eat dinner with my family and call it done.